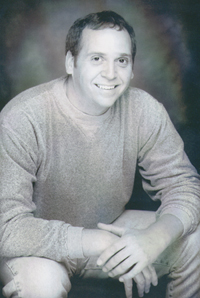 By the late 1990s he was a news producer and on-air anchor with Metro networks, and could also be heard on-the-air at Los Angeles powerhouse stations such as KZLA, ESPN Radio and KABC.

At the end of the 1990s he became Director of Programming for a start-up private entertainment and lifestyle TV network on the leading edge of what has now become streaming video entertainment.

Throughout those years, Adam stayed active as a voice-over talent, lending his voice to companies such as Honda Automobiles, Disney, Albertson’s Grocery Stores, the NHL, NFL and Major League Baseball just to name a few.

With his extensive background in broadcasting as well as radio and TV production and voice-work, it only made sense that he would join his friend and mentor, Ken Dab-Row, at Ken’s ad agency: Dab-Row Broadcast Advertising/Dab-Row Radio. They’ve been making beautiful music (well, commercials anyway!) together for over 15 years, with Adam as the principal producer for not only Dab-Row Broadcast Advertising, but also Ken’s personal inspirational website, Age My Ass.com.