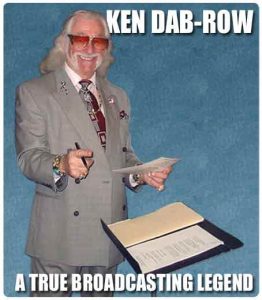 If you have listened to the radio or turned on a TV anywhere in America in the last 40 years, chances are you have heard or seen Ken Dab-Row. His unique powerhouse voice and captivating stature have made him a well known and recognizable figure, representing clients from coast-to-coast with trade-mark slogans and expressions like “Are you kidding me?”, “I’m dead serious”, and audio signatures like “Yippie Yai Yo Kaye” or “Amen, so help me Hanna!”

With Ken at the helm, Dab-Row Broadcast Advertising is directly responsible for hundreds of millions of dollars spent on radio and TV advertising across the nation, and it can truly be said his voice has been heard on hundreds of millions of commercial announcements. Ken Dab-Row truly is an American broadcasting institution! In fact, Ken was honored by The Southern California Broadcasters Association with their Lifetime Achievement Award, which has only been awarded seven times in the last sixty years.

But Ken Dab-Row is much more than a spokesman. His vitality and positive attitude are infectious to everyone he comes in contact with. People of all ages are constantly asking “How do you do it? How can you be this full of life, and this mentally and physically fit in your late 80s?” Ken enjoys sharing his formula for a long, happy, successful life. In fact, his inspirational website project – My Positive Power.com – is his way of doing just that. A one-of-a-kind broadcaster, motivator and true inspiration. That’s Ken Dab-Row! 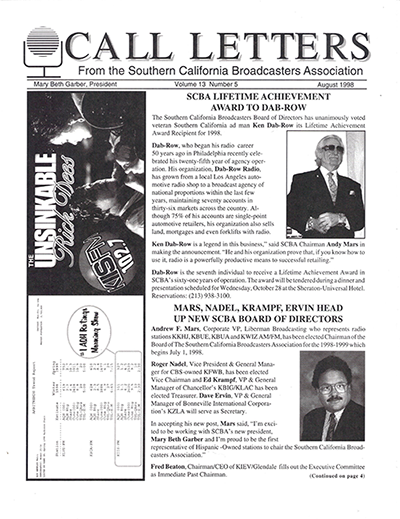 Dab-Row, who began his radio career 50 years ago in Philadelphia recently celebrated his twenty-fifth year of agency operation. His organization, Dab-Row Radio, has grown from a local Los Angeles automotive radio shop to a broadcast agency of national proportions within the last few years, maintaining seventy accounts in thirty-six markets across the country. Although 75% of his accounts are single-point automotive retailers, his organization also sells land, mortgages and even forklifts with radio.

Ken Dab-Row is a legend in this business,” said SCBA Chairman Andy Mars in making the announcement. “He and his organization prove that, if you know how to use it, radio is a powerfully productive means to successful retailing.

“Dab-Row is the seventh individual to receive a Lifetime Achievement Award in SCBA’s sixty-one years of operation. The award will be tendered during a dinner and presentation scheduled for Wednesday, October28 at the Sheraton-Universal Hotel.